From the end of October through December, I practiced techniques in harvesting and incubating eggs of the flamboyant cuttlefish, scientifically known as Metasepia pfefferi, or in our lab simply known as “metas.” Carefully lifting low-hanging rocks and checking under the smooth, vaulted surfaces of shells, I’d find clutches of a dozen eggs, give or take a few, delicately waving with the undulations of the water in the tank. When ready to lay their eggs, female Metasepia seek out low, vaulted surfaces, as these locations offer the best protection for their eggs and themselves as they go through the process of laying. In the wild they’ve been seen laying eggs into coconut cells, but in our lab, they often lay them under shells. Lifting their arms up into the selected surface, they carefully deposit eggs one by one, tacking them to the chosen surface with a biological glue.

At the Marine Biological Laboratory, our mission is to work toward creating and providing the standard of care for cephalopod species including squid, octopus, and cuttlefish. This standard of care includes optimizing the animals’ hatching success. This is why we opt to practice techniques in artificial incubation. Artificial incubation, instead of keeping the eggs in the tank with their mothers and other co-habituating adults, allows for close observation of embryos, prevents bio-fouling, and ensures proper oxygenation of embryos. Cuttlefish mothers provide little to no maternal care and removing eggs from their habitat allows the females to lay additional viable eggs. This method is also safer for hatchlings who may find their parent’s environment harsh, with high water flow that could push them around and the possibility of being mistaken for prey by adults. In the end, artificial incubation allows aquarists and researchers to create the most optimal conditions for hatching.

Taking sharp-tipped forceps, I gently scraped away the biological adhesive that glued the transparent eggs to the shells, delicately plucking them off and easing them into a bucket of seawater, one by one. The importance of the task was not lost on me. Every dime-sized egg felt valuable, a small promise of life within. Each step I took during harvesting and incubating could affect the possibility of that small promise reaching reality. Although just an intern, I felt I had been given a great task, and with it, the inherent pressure of succeeding in nurturing each little life. 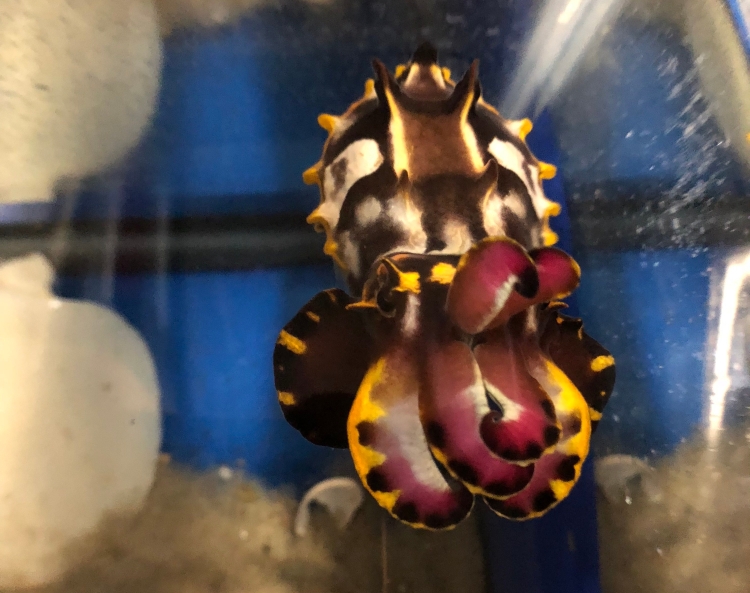 The next step before housing the eggs in an incubator is a ReVive bath, which is essentially a rinsing of the eggs with a plant-based surface cleaning extract. Typically used for corals, ReVive irritates copepods and ciliates, tiny organisms that live in seawater that crawl around and eat away at the external egg casings. Artificial incubation involves using the soda bottle method, an innovative design by my supervisor, manager of cephalopod operations Bret Grasse. The incubation device is constructed using two empty plastic bottles, cut to size, as the incubator shell and a mesh partition between the two bottle halves. The upward-facing cap is removed, and an airline inserted to allow a discharge point for air bubbles and exiting seawater. The bottom-facing cap is partially cut out and replaced with a mesh screen to allow for fresh seawater supply. Developed in 2013, this effective incubation method turned out to be a rather dazzling display, the eggs springing around in the soda bottles like balloons being tossed into the air.

As the days passed and the embryos bounced and bubbled around inside their soda bottles, the transparency of the egg casing welcomed me into their tiny worlds. I watched as their beady red eyespots developed, their heads and arms began to form and wrap around the yolk. Their mantles began protruding, followed by the formation of chromatophores, the pigment cells that allow for their color-changing abilities. Right before my own eyes, I watched tiny replicates of adult Metasepia form. I began to feel attached to the growing embryos, as if I had laid the eggs myself.

By January, hatchlings had taken over the lab. Still leading the care of the adults and now their 220 offspring, I would dote on the tiny cuttlefish, carefully conducting counts each morning, then feeding them. Feeding would take an hour and a half of my morning or longer, as I meticulously assessed the number of miniature mysid shrimp to place into the tank. Mindful not to startle them, I would bend down and peer into the tank with an angled flashlight to watch them feed. They’d turn slowly, bounding around on mantle papillae projections known as glutapods, a term that quite literally means “butt feet.” Their tiny movements were miniscule, meticulous, and slow.

Over countless hours of feeding and caring for these delicate animals, I began creating my own narrative with the critters. I’d chide the chunky ones for taking more food than their fair share, although regardless I was happy to see them eating and growing, as any mother would be. Just like a litter of puppies, there tended to be a “runt” in each group. I’d keep a close eye on the little guys during feeding to make sure they got at least one mysid each. I practiced my patience, not wanting to leave behind unwanted prey items that would rot and could cause the metas stress, and potentially death. Time consuming as it was, it was time that never felt wasted. The early stages of life are the most sensitive and most critical.

As I astutely cared for the delicate divas, a new idea was forming. I had now spent around four months observing and caring for these creatures. The pressure to succeed in raising the cuttlefish kept me working at my highest caliber. I felt that my understanding of their care was not quite perfected, but reached a professional level. My notes had begun to pile up, my observations numerous. I wanted to dig deeper, there was much to still be discovered about these animals beyond their care and keeping.

Interested in more? Read the rest of this story and others from my thesis here.