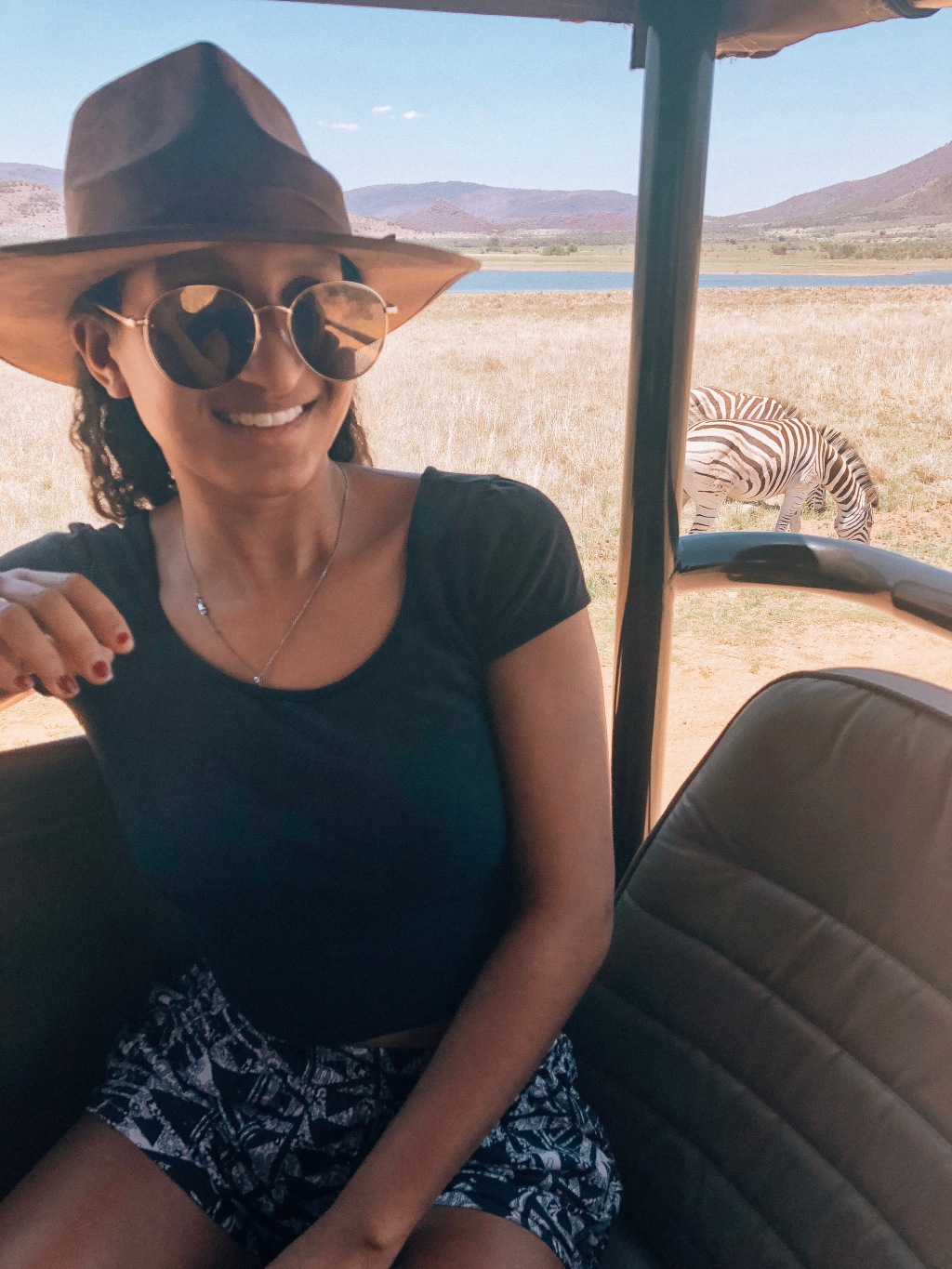 Safari through the Sub Saharan

I sat wobbling from side to side in the farthest back row of an open-air van as it made its way down the rocky dirt path into Pilanesberg National Park. Tori Caba, a close friend and fellow naturalist and conservationist whom I had met in college through our shared marine biology major sat next to me smiling, her long blonde hair tied into a pony tail and sunglasses fixed on her oval-shaped face, covering her sharp blue eyes. On the way into the park, we spotted a few medium-sized antelopes known as springbok, which our guide Rafta told us is the national animal of South Africa. These were the first of many animal sightings of the day, and we were eager to see more.

The early hours of the day welcomed us with the heat of the African sun, we inhaled the dry air and the kicked up dust from the turning tires of our jeep-like safari vehicle. After making the two-and-a-half-hour trek from where we were staying in Johannesburg, South Africa to Pilanesberg through a service called Safari With Us, an ethical tour operator certified by the South African Tourism Services Association (SATSA), we began to take in the surroundings of the landscape to which we had been transported. Dry, orange-tinted sand flecked with patches of straw-grass stretched out for miles in all directions, bushes and trees popping sporadically out of the ground. The combination of the heat and the overall appearance of aridity led me to mentally take stock of the amount of water we had brought along.

The tour practically guaranteed that we would see at least three of the big five, which includes the lion, leopard, rhinoceros, buffalo, and the elephant. The big five is a term that was originally coined by hunters to describe the animals that were most difficult to track on foot. Today, safaris use the term to categorize “safari royalty.” We were largely successful with sighting royalty, among others, in the morning. Upon entering the park, we almost immediately spotted hippos, who were wading in a reservoir filled with murky water. This is one of the number one killer of humans in Africa,” our guide Rafta stated.  In disbelief, I later checked this fact, learning that hippos do in fact cause the most human fatalities of any large animal in South Africa. We saw a variety of other characters that make an appearance in The Lion King; warthogs and their young running through the tan grass, zebras grazing peacefully with mountains in the backdrop, giraffes with their necks craned high up in the trees, and of course lions, resting in a far off, shaded spot as the heat of the afternoon approached. In addition to the lions, we saw two more of the big five: rhinoceros and elephants.

Early on during the safari Rafta said he’d answer any questions we may have along the way. When asked how many rhinos were in the preserve however, he wouldn’t disclose the number, because of poachers. Poaching, the practice of illegal hunting of wild animals, is a threat that has led to the endangerment of a number of species. In the 1970s, the poaching of black rhinoceros in particular became an epidemic as populations decreased from 70,000 to just over 2,000 by 1995. Most of this poaching is done for the purpose of trading the prized horn of the rhino, a commodity in many Asian countries. Rhinoceros populations also face the threat of habitat loss, which in combination with poaching has given them their critically endangered status. On the other hand, white rhinoceros’ populations are currently listed only as threatened, largely in part to conservation efforts that brought the species back from near extinction.

While Rafta wouldn’t share an exact count on the rhinos, he did share that the park does in fact have both black and white rhinoceros. The two types of rhinos are distinguishable not by color, but by the shape of their mouths. White rhinos have a flat, wide mouth while black rhinos have a pointed lip, differences that developed for advantageous foraging between the two species. The first of the two we spotted was a white rhino, laying beneath the shade of a marula tree. The couple sitting in front of us had brought binoculars and were kind enough to pass them back, so we could observe the distinct flat mouth of the massive rhino. While we spotted the rhino on its own, we were also able to spot a few groups of elephants early in the day. When Rafta first greeted us all in the morning, he asked which animals we all hoped to see. My response was elephants, to which he affirmed his certainty that we would encounter some. The ones we spotted remained at a distance, traversing up the side of the mountain or grazing in areas densely packed with trees. I marveled at the masses, even from a distance. We headed to lunch already satisfied with our safari sightings, unaware of just how satisfying the afternoon would be.

Heading back out after lunch, we were surprised to find that the animals were highly active. We had assumed they’d be more active in the morning while the weather was cool, but we were proven wrong as the animals were actively seeking shade and water during the hottest hours of the day.

We soon stumbled upon a herd of elephants intermingled with hippos, splashing and showering joyfully in a watering hole. Our small group exited the van, taking the opportunity to view the creatures from a designated observation deck. We all silently agreed to take a long pause here, taking in the peaceful coexistence of the two species, uninterrupted and possibly even unknowing of our presence. We lingered for a long time, turning to reload into the van only after most of the elephants had completed their combination of bath and play time.

Not long after pulling away from the waterfront site, we found a group of African elephants grazing on a small tree known as magic guarri directly next to a dirt path that could easily be navigated by our van. Rafta could sense our interest but was clearly cautious, slowing down as we approached. Soon the van was at a complete stop and we were surrounded by pachyderms, the herd consisting of at least a dozen individuals. A mom trailed closely by her calf clambered across the path right behind the van. Directly next to Tori, two elephants tugged at branches until they broke off, guiding the treat between their tusks. The elephants swung their tails gaily as they ate, paying no mind to us.

A select few bulls, however, came amazingly close to our van. Seeing the creatures close up was nothing short of magical. One approached my side of the car, looking directly at me with its large brown orb of an eye. I could see clearly the crisscrossed ridges of its course skin, I could have reached out and touched it. It almost seemed to be nodding at me as it walked alongside us casually swinging its trunk. Rafta started moving forward a bit at this point, the elephants coming too close for his comfort. As much as I wanted to let them get closer, I didn’t know how much longer I could resist the urge to connect physically with the creature.

Rafta continued to slowly navigate our way through the thick of the herd. An elephant that was no longer a calf but not quite a bull stood munching on a bush, its large ears flicking forward and backwards. “The African elephant has ears shaped just like our continent,” Rafta shared, “just like Africa, you see?” While I was still staring at the elephant’s ears and noting the shape, Rafta began to make a final pull away from the herd. I was left reeling over the encounter, the proximity, the peace, the pure grace of the creatures. Rafta claimed it was rare to encounter them so closely, and for the first time I noticed that there we no other cars nearby.  Throughout the day it seemed as if other vans or cars had trailed not far behind. But in this silent, shared moment with these majestic creatures, we were the only vehicle around.

Elephants face the same threats as rhinos; poaching and habitat lost. Elephant poaching is an industry that exploded once their ivory tusks became considered a commodity. While in the early 1900s there were once ten million elephants roaming the sub-Sahara, there are now estimated to be around 400,000. I felt the weight of the importance and the rareness of our encounter.

On our way out of the park for the day, I turned back to watch the landscape roll out behind us, listening only to the sound of the wind blowing and tires turning. The green of the marula trees and magic guarri lined the path we took out of Pilanesberg. My eyes were fixed on the mountains that curved along the horizon. We were lucky to have spent a peaceful day under the African sun, spotting more than 20 different animals. We walked away feeling fortunate to have experienced this ethical adventure and witness the effort going into preserving and educating about these animals. The experience served as an important reminder to keep our values at the forefront, to remember what makes our existence feel as pure and true as that of the elephants. In just a few short days we would be exploring a new landscape, one that contrasted directly with our day spent in the dry desert.

Mom + Dad 🧡 est 2023
‘22 has been one of my favorite years so far 🦋💭🕊but the best is still yet to come. SO excited for you 2023 🥹❤️
2022 unlocked my travel era 🔐✈️🌍 and subsequently one of the most meaningful journeys of my life
This year was just too good to me 💖 I am so grateful to this cycle around the sun, a year of so much growth, personal growth and of course growing baby apple 🥰👶🏽🍎❤️ (ps it’s gonna take more than one reel to recap this year 😚)
They say it takes a village, we’re so lucky for ours here in St Pete 🧸💚
Babymoon of my dreams! So grateful for one last getaway just the two of us 🧡